This region was occupied for thousands of years by Native Americans of the Glades culture. The south Florida tribes – the Calusa and Tequesta frequently visited the Everglades to hunt and fish. The Calusa was the most powerful in the region. Calusa territory was from what is now Fort Myers and extended south to Everglades City and Chokoloskee. Calusa shell mound villages were built primarily at the mouth of rivers and on small islands. By the early 1820’s most of this area was uninhabited – though local legend claims Seminole Indians planted potatoes along with is now the Barron River. In 1922 none other than Barron Collier began purchasing large parcels of land in the area. Collier also built a road to connect Everglades with what is now US41. He also built the Collier County Court House in 1926. The building is still located in the center of Everglades City and was listed on the National Register of Historic Places in 2013. Everglades City was the Collier County until 1962 when it was moved to East Naples.

Birdwatching, Nature Boat Tours, Kayaking, Hiking, Manatee and Charter Fishing Tours are just a few of the popular attractions and things-to-do in Everglades City. The entire family will love your Double R Fishing and Manatee tour. View manatee and other Florida wildlife in the water just north of Everglades City. Florida fishing Captain Jesse Hill will take you south of Everglades City into the Gulf of Mexico waters on the ultimate Everglades fishing adventure. The Museum of the Everglades holds interesting local photos and memorabilia. It is located just off the circle in the center of town. The Everglades Museum is in what was originally built as the Old Laundry. The building dates to the time when the Tamiami Trail was being constructed. Built by Barron Gift Collier as part of his planned community, the laundry served the people of the new city of Everglades – now Everglades City, FL. 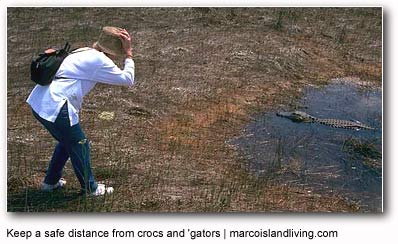