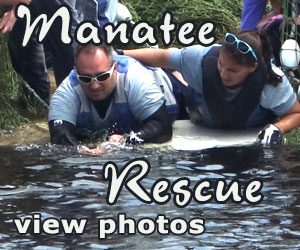 The Florida Fish and Wildlife Conservation Commission biologists are responsible for coordinating rescues of sick and injured manatees.  It was at the Port of the Islands Marina in Naples, FL when FWC was called in to investigate a troubled manatee. The injured manatee was swimming with a calf (baby manatee)  when it was apparently struck and injured. The manatee showed signs of a punctured lung – it was unable to submerge and was in danger of dying. FWC began a Manatee Rescue Mission to capture both the injured manatee and the baby manatee.

Include Me shortcode: file not found

If you would like to view manatees up close and in the wild call Double R’s Fishing and Tour Company. View a slide show of the FW Manatee Rescue by clicking on the manatee photos below.  Ask us about your Marco Island – Naples FL manatee tours or share reviews. To feature your FL boat tours, contact us. 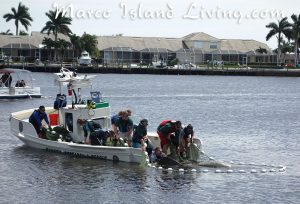 FWC rescue team, under the watchful eye, of armed agents began the process by circling the injured manatee and then corralling the gentle but heavy “elephant of the sea” into a net and eventually into a rescue boat and then into a specially equipped Manatee Rescue Truck that brought the manatee to the Florida State Manatee Rescue Center to be treated and eventually released back into south Florida waters. 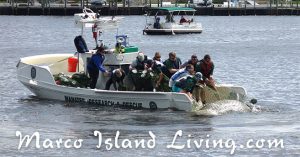 It is now illegal to hunt manatees in the United States. Manatee, however, are still hunted in all other parts of their range. Most of the time it is opportunistic hunting, such as when the manatee accidentally wanders into a fisherman’s net and is used for food. Poaching of manatees in the United States is extremely rare,  but it does still occur.   Manatees do not have any natural predators in the wild other than a shark or large gators. Manatees are too large to be attacked by most other animals. There have been incidents of manatees being predated upon by sharks and alligators, mostly by small manatees or calves.  Humans account for nearly 40% of manatee deaths, where the cause of death is known. This includes deaths from watercraft, locks/canals, and other human-related sources, such as discarded fishing line.  The Florida Wildlife Commission works hard to protect Florida wildlife. We thank them for their work and congratulate them on their efforts at Port of the Islands, Naples Florida.