The egret is usually white or buff and a heron. There are several different species of an egret. During the breeding season, they may develop plumes. In the 19th and early 20th centuries, egrets were hunted for their plumes because they were used in making the elaborate hats that were so popular at that time. The hunting of these majestic birds has caused some of the different species to become endangered.

The mockingbird is known to be an excellent songbird. They are often heard in the springtime singing under the bright moonlight. There are ten species of mockingbirds and they are roughly the same in appearance. About 10″ in length, a 15″ wingspan, grayish on top with white underneath and patches of white on tail and wings. Both the male and female build the nest out of twigs and rootlets which are arranged to form a dense open cup. Eggs are a pale blue-greenish color with brown spots and typically number between 3 and 6 per nest. Mockingbirds are well known for their fierce protection of the nest. 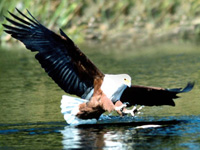 The bald eagle’s natural habitat spreads from Alaska to Baja California on the west coast. On the east coast, it ranges from Maine to Florida. Bald eagles will typically migrate from the north to more southern regions during the winter months. However, some that choose to live in the southern regions may venture north a little during the hot summer months. Bald eagles live mostly on fish but also eat small animals such as rabbits, snakes, and muskrats. Bald Eagles are monogamous and mate for life. The male and female share the tasks of hunting, egg incubation, nest watch, eaglet feeding, and eaglet brooding. 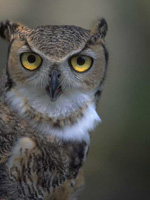 Burrowing owls will often use abandoned gopher tortoise holes or armadillo burrows. If an empty hole is not available they will make their own. They prefer locations that have a bare ground or short grass. The burrowing owl is around 9 inches tall. It protects the home and family by using the sound of a warning rattle similar to that of a rattlesnake. They search for food such as insects, lizards, mice, frogs, and other pests during the day. Ask us about Birds on Marco Island or share birding comments. To feature your business, contact us.