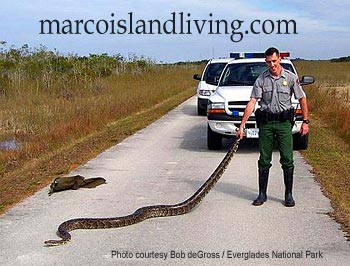 5:13 P.M. — Marco authorities are wondering how a 9-foot python found under a pool deck this morning could have made its way onto Marco Island. “That’s what we’re wondering,” said Nancy Richie, the city of Marco Island’s environmental specialist. Marco is separated from the rest of Collier County by the Marco River. “But they can swim,” said Bobby Dube, community relations officer with the Florida Fish and Wildlife Conservation Commission. “We’ve seen them swim.”Richie said she got a call from an employee of Sandcastle Management, a landscape firm, who told her lawn workers had found a dead snake under a pool deck. “Then, he called back 15 minutes later and said it was alive,” said Richie, who then went to the home in the 800 block of Buttonwood Court to investigate and take photos.

The snake had been taken out of the home’s backyard and placed in the grass, where Marco Island Police officers measured its length at 9 feet.An FWC officer arrived on the scene in about 15 minutes, Richie said. The snake was placed in a bag and taken to Rookery Bay, where it will studied and likely euthanized, said Dube. Just how it got there is unclear.Richie said the snake could have been someone’s pet, which she said she doubted. “It could have come on the island in a landscaping truck, in a lawn-care vehicle,” said Richie.
But then again, it could have slithered its way over the S.S. Jolley Bridge that connects Marco from the mainland, she said.

“We’re not sure how it got here,” said Richie. It was a first for Marco, said Richie.
Recently, more and more pythons are being discovered in the nearby Everglades, likely discarded pets left to fend for themselves in the harsh Florida environment, Dube said. “They’re all over the Everglades now,” said Dube, “and even as far down in the Keys as Islamorada.”

Most recently, a python crawled onto the tarmac to sun itself on a cold, windy day at the Marco Executive Airport, which is just north of the island, Richie said. If homeowners find a python in their yards, she said they should immediately call the FWC’s nuisance animal hotline at 888-404-FWCC.

Share your Marco Island – Naples FL reviews or ask us about visiting Marco Island Florida. To feature your business, contact us.

Florida Pythons in the Everglades

Island Hopper Boat Rentals and Tours, 525 Newport Dr., Naples, FL 34114 | 239-961-2473
Guided boat tours leaving Port of the Islands Marina, Naples, Florida Touring the Everglades and the Ten Thousand Islands area. Rent a pontoon for a full day of fun. Whitehorse Key is a great place to beach your boat and find amazing shells. Walk the island, explore the 10,000 islands, and enjoy a great view of the Gulf of Mexico. Look for manatee, dolphin, alligators and everything the Everglades has to offer. See the 10,000 islands up close.
Visit Island Hopper Boat Rental & Tours - Naples, FL